Skip to content
ALEXANDER MCQUEEN… hell has no fury like a woman scorn and Sarah Burton is coming back full fury.(I would too if I was in his shadow for 16 years) After McQueen passed I really didn’t think highly of the idea of continuing on. And I still don’t. Out of the entire collection that premiered I only liked two looks. Don’t get me wrong, there was texture galore… but I honestly thought she was trying too hard to live up to the reputation that mcqueen had become known as.
On a positive note i LOVED these two looks. Everything else was too much. I thought we were editing down collections… urghz. 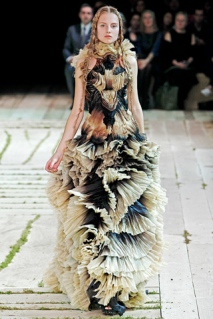